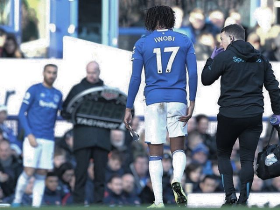 Alex Iwobi has posted an injury update that will certainly please Everton and Super Eagles fans.

The Nigeria international has not played a competitive match for the Toffees since suffering a hamstring injury in the opening minutes of the goalless draw against Arsenal on December 21.

Iwobi has not been available for selection for as many as five games - against Burnley, Newcastle United, Manchester City and Brighton & Hove in the Premier League and Liverpool in the FA Cup.

Everton boss Carlo Ancelotti suggested that the injury will keep the Nigerian sidelined for three weeks and it appears his recovery went according to plan as he has started individual training at USM Finch Farm.

Before Iwobi's injury-enforced absence, he had played 20 matches in all competitions, scoring two goals, following his deadline day move from Arsenal last summer.

Everton, who are 11th in the standings after 22 games, travel to West Ham United in their next Premier League match.