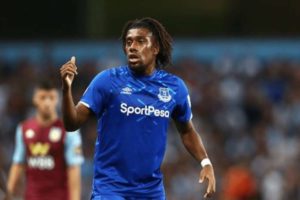 The Everton forward does not do enough for the team despite his immense talents, according to former England goalkeeper Paul Robinson.

Iwobi has been tagged a frustrating player for fans and manager alike with former Tottenham shot-stopper Robinson picking the Nigeria international out as the scapegoat for the weekend loss to Leicester City.

The former Arsenal star had a hand in Everton’s goal at the King Power Stadium but another Nigerian turned the tie around for the home side as Kelechi Iheanacho came off the bench to assist Jamie Vardy’s equalizer before netting a late winner.

The 23-year-old only played for 78 minutes before he was subbed off for Moise Kean.

But Iwobi, who arrived Goodison Park for a reported £34million, has been attacked by Paul Robinson for often letting the team down due to his poor end product.

“He’s frustrating, his ball retention isn’t as good as it should be,” Robinson tore into Iwobi for being careless in possession.

“Silva complained last week or the week before that he didn’t have enough pace going forward so this week he played Iwobi, Richarlison and Calvert-Lewin so the pace up top wasn’t a problem.

“But not enough sticks with Iwobi, it’s his end product.

“The pace and attacking threat is there, but he is frustrating at times.”

Iwobi has featured 15 times across all competitions for Silva’s team this season, scoring two goals and registering one assist in the process.