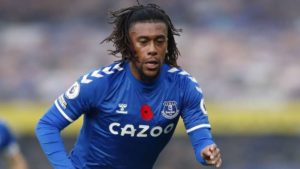 Alex Iwobi was on parade as Everton lost 2-0 to Newcastle United in Saturday’s Premier League game at Goodison Park.

The 24-year-old returned for the Merseyside outfit against Leicester City on Wednesday, making a cameo appearance in the encounter.

The Nigeria international missed his side’s outing against Sheffield Wednesday in the fourth round of the FA Cup on January 24.

The forward was then restored to the starting XI against the Magpies to afford him more opportunities to make a meaningful impact for the club.

Iwobi gave a good account of himself in the encounter but his effort was not enough to help his side avoid their sixth defeat of the season.

The game started with both sides striving to outwit each other but despite their efforts, the first half ended without goals.

After the restart, Callum Wilson broke the deadlock in the 73rd minute of the encounter after he was set up by Jonjo Shelvey.

The forward powered home a fine header past goalkeeper Jordan Pickford before completing his brace moments before full-time.

With the defeat, the Goodison Park outfit are seventh on the Premier League table with 33 points from 19 games.

Iwobi featured for 63 minutes, had 23 touches and completed 19 passes before he was replaced by Andre Gomes.

The versatile forward has been delivering eye-catching performances since the start of the season for Carlo Ancelotti’s side.

The Super Eagles star has featured in 21 games across all competitions this season, scoring two goals and providing three assists.

Iwobi will hope to make a more meaningful contribution for Everton in their next Premier League game against Leeds United on February 2.

The forward remains a key member of the Nigeria national team and will be expected to maintain his fine performances ahead of the Super Eagles’ 2022 Africa Cup of Nations qualifiers in March.