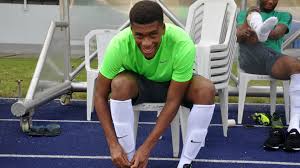 Arsenal striker Alexander Iwobi has made his international debut for Nigeria, which ends any chance of England convincing him to represent them in the future.

The 19-year-old’s breakthrough has been one of the highlights of Arsenal’s season, and there were reports that England representatives were attempting to convince him to choose them over Nigeria.

Iwobi appears to have confirmed those rumours, posting on Twitter that he would like to thank England ‘for giving me the chance to represent them’.

That came after he came on as a second half substitute in Nigeria’s game with Egypt.

The game finished 1-1 as Egypt scored a late equaliser, but Iwobi was still delighted to have made his international bow.

“Unlucky not to win but happy to have made my competitive debut.