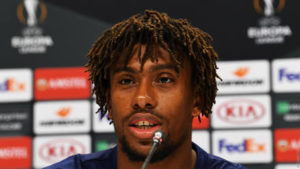 Super Eagles winger Alex Iwobi says the side will turn their disappointment of losing AFCON 2019 semifinal to the Desert Foxes of Algeria into motivation to pip Tunisia in Wednesday’s Third-Place encounter at the Al Salam Stadium, Cairo, Completesports.com reports.

The Desert Foxes ended Nigeria’s hopes of winning a fourth Africa Cup of Nations title by edging out the Super Eagles 2-1 in their semifinal match at the Cairo International Stadium on Sunday.

A William Troost-Ekong own goal and Riyad Mahrez’s sublime free-kick in the last minute was enough for the Algerians to seal a place in the final where they will face the Teranga Lions of Senegal. Odion Ighalo scored Nigeria’s only goal of the game from the spot.

The Super Eagles have a chance to take something home from the competition when they take on Alain Giresse’s men.

“It hurts a lot to lose in the semifinal. We have a chance to put things right in the third placed game. Hopefully, we can use our anger to try and win the game.”