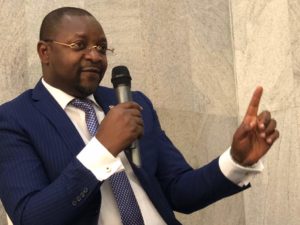 Minister of Youth and Sports Development, Sunday Dare, says his ministry has the power to reposition the Eagles for optimal performance.

Dare who was speaking with News Agency of Nigeria in Minna on Thursday, said, “As a Minister of Youth and Sports Development, it is my responsibility to make sure that our sports sector is growing. We expect good results from the national team’s technical crew.

“Therefore, we will review everything about the Super Eagles to enable the national football team progress and give us good results.

“We (the Sports Ministry) are not happy with what happened in Sierra Leone. Therefore, we have to do something to make the Super Eagles give us good results.”

The PUNCH had earlier reported that Dare said the sports ministry and the Nigeria Football Federation would make a decision on Rohr’s future after the Freetown game.

Dare in a tweet after the Eagles goalless draw against Sierra Leone in Freetown on Tuesday, questioned Rohr’s “suitability and competence”, saying, “Nigerian football deserves better” and promised that the “needful will be done.”

The Eagles had also squandered a four-goal lead in the first leg of the tie played at the Samuel Ogbemudia Stadium, Benin last Friday, after the Leone Stars scored three goals in the last 10 minutes of the game to secure a 4-4 draw.

Dare’s position has however pitched him against football followers in the country, who said plans to lay off Rohr amounts to interference, which is against FIFA statues, which forbids government interference in football.

“But isn’t it the job of NFF to ascertain if the coach is fit or not? Your job is the overall welfare of the sports ministry, you should leave them to do their job while you face yours sir,” @ollasupo tweeted.

Another Twitter user @GeorgiaRaz also added, “Stay away from our football! This is the NFF’s job. Your athletes are learning vocational skills because of lack of competitions. The Olympics is next year. That should worry you more.”

While @bossjay42 added, “Do not interfere in the decision making of the NFF . Rohr brought stability to the team, allow him do his job, he can still qualify the team for the AFCON. We no longer need calculator to do math on the last day of qualification and that is due to him.”

“NFF exists for a reason, let them do their job, don’t interfere. Your ministry is one of the ministries in this country that is just there to make up the number, nothing tangible has been achieved,” @Mrchinazorduru1 also added.