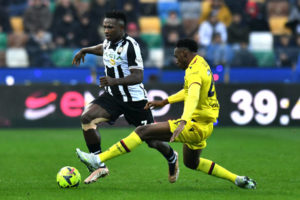 The 27-year-old  provided the assist for Udinese’s goal in their narrow home defeat in the Italian Sierie A.

Success gave Beto the pass in the 10th minute to score and put Udinese in the lead, but the Bianconeri couldn't hold to the lead in the second as Nikola Sansone and Stefan Posch scored two in the 59th and 80th minute to give Bologna the win.

Success would have restored parity for his side on two occasions, but a poor finish and a save from the goalkeeper denied him his first goal of the season.

Isaac Success has registered four assists in his last six Serie A games this season.  He joined Undinese from Watford in August.