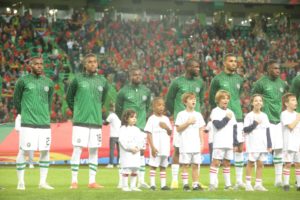 It was another bad day in the office for the Super Eagles as they lost heavily against Portugal in an international friendly played on Thursday.

The Super Eagles fell four goals to nothing in the hands of World Cup bound, Portugal at the Estadio Jose Alvalade, Lisbon.

Manchester United midfield maestro, Bruno Fernandes scored two goals before half time to give the home side a comfortable lead. 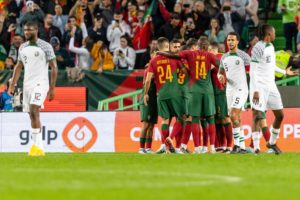 He scored the first in the 9th minute before getting the second from the spot in the 35th minutes. It could have bye a hat trick minutes later after his effort hit the side net despite rounding up goalkeeper Uzoho.

The start of the second half seemed to give some kind of hope for the Nigerian team as the play was better as Chukwueze got the best chance of the day for the Eagles in the 71st minute, but goalkeeper Patricio saved the ball with his leg.

The little ascendency gained culminated in a penalty that was unfortunately missed by Emmanuel Dennis in the 81st minute.

Goncalo Demos will go on to punish the Super Eagles a minute later with the third goal before Jaoa Mario completed the rout in the 84th minute.

The Super Eagles have now lost their friendly matches under Coach Jose Peseiro against Mexico, Algeria, Ecuador and Portugal.