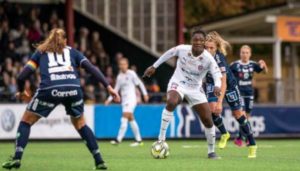 Jonas Eidevall’s team came into the encounter having secured a 3-0 victory over Djurgarden, where the Nigerian youngster scored her first goal of the season on her second start at Malmo IP.

Following her exploits in the team’s last outing, the 2018 Africa Women’s Cup of Nations winner was handed her third start of the season and she made the best of the opportunity in Orebro.

Imo justified the confidence reposed in her by hung on until Johanna Rytting Kaneryd set up Anna Anvegard to double the lead two minutes after the former replaced Imo in the 68th minute.