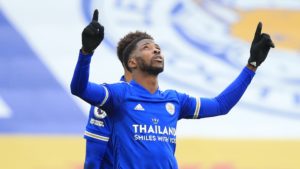 Kelechi Iheanacho has thanked Leicester City fans for helping him win the club’s Goal of the Season award.

The Nigeria international’s superb strike in the 2-1 home win against Crystal Palace was adjudged as the best for the season.

The forward also hailed Johnny Evans for his brilliant assist for the goal.

“It feels good! It was a great goal and a great ball from Jonny. That goal is really a great goal and I’m happy that the fans chose that as the best goal this season,”Iheanacho told LCFC TV.

“I’m really, really happy. When the ball got played from Jonny, I got it down inside and took it back. The only thing on my mind was to shoot, and that’s what I did. It went in the back of the net, so it was really a great pass from Jonny.

“As you can see, everybody was so happy, the staff as well. It meant a lot for the team because we really worked hard in that game to come from behind.

“Jonny made a great, great tackle as well, and that helped us as well because that was like a half-goal for me. He ran from the halfway line to make that tackle. It was a great moment and of course, making the assist as well for me to score, was fantastic.”

Iheanacho enjoyed plenty of memorable moments in 2020/21 for City, not least sending the Foxes to their first Emirates FA Cup Final in over five decades with a winning goal against Southampton in the semi-final at Wembley Stadium.

He said: “There are a lot of great moments so I can’t really pick one, but I think the goal against Southampton… that got us to the final of the FA Cup. It’s not the best goal, but it had so much emotion with it so that will be the moment for me.

“It’s the moment that Leicester City Football Club had a chance to get to the FA Cup Final. It’s been a long time and they’ve been waiting for that.

“It was a great ball from Jamie [Vardy] down the line. The ball fell kindly for me and it was really emotional that day. It was a great day, and to win the trophy was one of the best moments. That moment was great for me.”