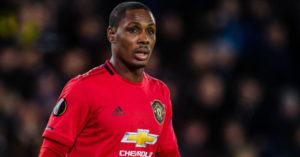 Released Manchester United striker, Odion Ighalo, is on the verge of securing a move to the Middle East to continue his career.

According to Sky Sports, Saudi Arabian club Al-Shabab are already in talks with the Nigerian with the hope of securing his services.

Chinese club, Shanghai Shenhua, have given Al-Shabab permission to speak to Ighalo.

The transfer window in Saudi Arabia runs until February 7.

Ighalo’s loan spell at Manchester United from Shanghai Shenhua came to an end earlier this week.