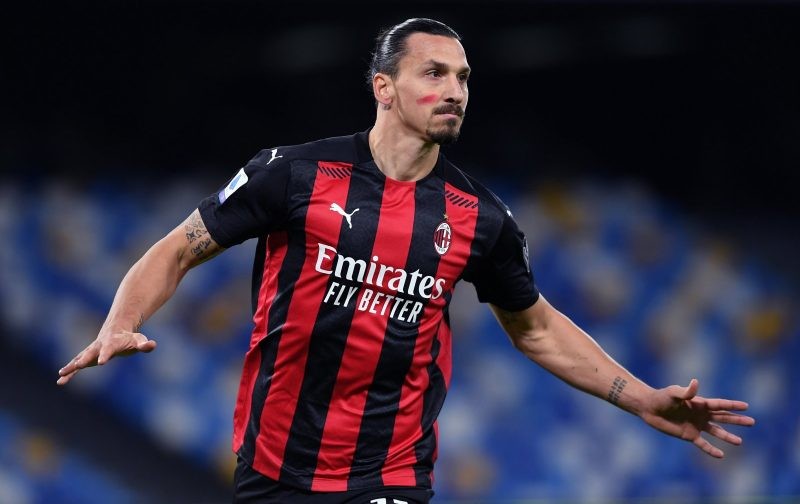 AC Milan are back atop the Serie A standings after another sensational Zlatan Ibrahimovic performance saw them claim a 3-1 victory over Napoli at the Stadio San Paolo on Sunday night.

The Rossoneri were temporarily displaced from first after Sassuolo’s victory earlier in the day but it was short-lived after the Diavolo claimed their first victory over the Partenopei in 11 tries.

Much of the credit must go to Ibrahimovic as the Swede netted twice – the first of which was a spectacular header from distance – to help Milan stamp their authority over former boss Gennaro Gattuso. Although Dries Mertens’ strike cut the lead in half in the 62nd minute, it wasn’t enough as Tiemoue Bakayoko picked up a red card against his former side soon after to complicate matters and let the air out of a possible fightback. Jens Petter Hauge scored his first Serie A goal for Milan in injury time to put a bow on proceedings.

Matteo Politano got things going by forcing Simon Kjaer into a desperate interception, while Milan responded via a Hakan Calhanoglu effort that Alex Meret palmed away.

The deadlock was broken in the 20th minute as Ibrahimovic headed home a great header from just inside the penalty area. Theo Hernandez fired in an inviting cross and the Swede got in front of Kalidou Koulibaly to steer his effort into the far bottom corner.

The goal means Ibrahimovic now joins the likes of Gabriel Batistuta, Christian Vieri and Krzysztof Piatek in becoming the fourth player to score in each of his first six Serie A games of the season in the three points era.

The goal woke up Napoli as Mertens almost picked out the back of the net with a great strike from distance, however Gianluigi Donnarumma got down to push it round the post.

Napoli had three chances from the resulting corner with Bakayoko’s shot parried by Donnarumma, Giovanni Di Lorenzo firing his strike onto the bar while Hirving Lozano saw his rebound tipped over the bar.

The half ended with Mertens forcing Donnarumma into another save from a Lorenzo Insigne free kick.

The momentum didn’t carry over to the second half for the home side however as Milan doubled their advantage off a surgical counter in the 54th minute. Ante Rebic surged forward and took on Kostas Manolas before floating in a pinpoint cross to the far post the Ibrahimovic pushed in using his knee.

After the Swede saw a third correctly called back for offside it was Napoli that took advantage of sloppy Milan defending to cut the deficit in half.

Franck Kessie lost the ball just outside the penalty area and after Mario Rui fired in a low cross that Alessio Romagnoli couldn’t control, Mertens was quickest to it and fired under a charging Donnarumma to reopen the contest.

Napoli’s fightback was dealt a quick blow however as Bakayoko picked up a second yellow minutes later for a silly lunge on Theo Hernandez that was never going to work out.

It wasn’t all good news for the Rossoneri though as Ibrahimovic pulled up clutching his hamstring with just over 10 minutes remaining, with youngster Lorenzo Colombo coming on in his place.

Colombo and Andrea Petagna saw late chances go to waste before Hauge latched onto a Ismael Bennacer through ball before squeezing it past Meret from a right angle to wrap up a famous victory for the Rossoneri.