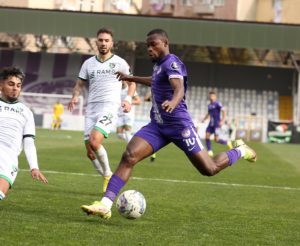 Ankara Keçiorengucu are back to joint-second in Turkish First Lig after a 2-0 win over Denizlispor courtesy of a goal and an assist by Ibrahim Olawoyin.

Olawoyin was at his imperious best on Saturday for Ankara Keciorengucu as his assist and goal helped to record an important at Aktepe Stadi.

He supplied the pass for Rashad Muhammed’s opener in the 38th minute for the striker’s seventh league goal of the campaign from 12 games. It was Olawoyin’s seventh assist of the season.

Olawoyin scored in the 58th minute to seal the maximum points for his team and also a return to winning ways after the 2-1 loss to Goztepe a few days ago.

The former CHAN Eagles player who had 8 goals, 8 assists and 4 penalties won last season for his team is on course to better that feat this season.