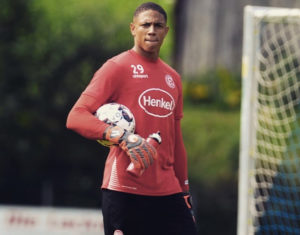 Maduka Okoye has set a target of becoming the Nigerianational team's first-choice goalkeeper following his performances against Algeria and Tunisia.

The Sparta Rotterdam shot-stopper was afforded his full debut against the Desert Foxes on Friday and did enough to keep the scoreline at 1-0 at the end of the game, making a number of saves in the encounter.

His showings against the African champions earned him his third Super Eagles cap and second start against Tunisia in Tuesday's friendly.

The 21-year-old again gave a good account of himself in the encounter to ensure the West Africans avoided defeat.

Okoye featured for the entirety of the games as Super Eagles regular goalkeepers Daniel Akpeyi, Ikechukwu Ezenwa and Francis Uzoho were not involved in the matches.

The young shot-stopper is disappointed with his inability to keep a clean sheet in the outings but has promised to keep working hard to become Nigeria top goalkeeper.

“Of course, it’s great and it’s cool playing 90 minutes in the two friendlies. It was not easy games but I am happy with my performance,” Okoye told the Punch.

“In the Algerian game, we conceded in the fifth minute and it was not good. There was too much on our minds.

“A goal that early was bad but we had to keep on going. We kept on going for over 85 minutes. As I said, it’s not nice to concede goals but that’s football.

“I’m happy to be in the team. It’s always better to have a clean sheet but I’m looking forward to more games with the team.

“I will keep doing my thing and do my best and give my coach the reason to make me the Eagles first-choice goalkeeper.”

Nigeria have struggled to replace Vincent Enyeama since his retirement from international duty in October 2015.

Ezenwa was the Super Eagles first-choice goalkeeper during their 2018 World Cup qualifiers but Uzoho was preferred ahead of him at the global tournament.

At the 2019 Africa Cup of Nations in Egypt, Akpeyi was made the first-choice goalkeeper as Nigeria managed to finish third in the competition.

Okoye recently changed his club from Fortuna Dusseldorf II to Eredivise side Sparta Rotterdam in an effort to enjoy top-flight football.

The goalkeeper will hope to deliver impressive performances for his Dutch side to boost his Super Eagles target.