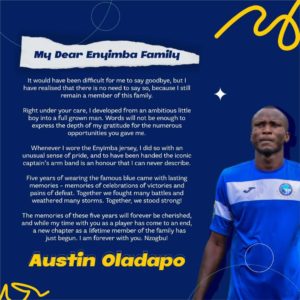 Midfield marshall, Austin Oladapo who recently signed the dotted lines for TP Mazembe have written a message for Enyimba, his former club.

The Aba giant's ex-captain has told the club in an emotional statement that he was not going to bid farewell for he is part of the family.

"It would have been difficult for me to say goodbye, but I have realized there is no need to say so, because I still remain a member of this family"

The player who formed an integral part of Enyimba spent five years of his life with the eight-time league champions and he doesn't take those times for granted.

"Right under your care, I developed from an ambitious little boy into a full grown man. Words will not be enough to express the depth of my gratitude for the numerous opportunities you gave me.

TP Mazembe confirmed on Sunday that have agreed a two year deal with the midfielder with an option for a third.

He was scheduled to have it medicals on Monday.