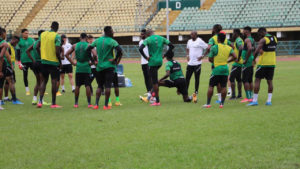 Home-based Super Eagles are set to take on their DR Congo counterparts in a soccer invitational also featuring Sierra Leone and Congo Brazzaville.

The tournament kicks off tomorrow in Kinshasa. And Nigeria Football Federation officials are hoping that the team will be in a good competitive edge when the Africa Nations Championships qualifiers start next year.

Some of the players in the squad include Silas Nwankwo, Tope Olusesi, Adeleke Adekunle, Cyriel Olisema and Tosin Omoyele.

The team have been in camp in Abuja for the past two weeks. The four-nation tourney will run from September 30 to October 3.