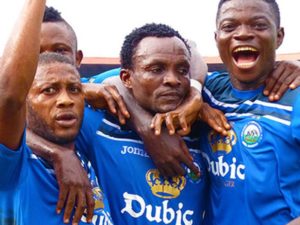 Wasiu Alalade scored in stoppage time to give Enyimba of Nigeria a 1-0 homecoming victory over CARA of Congo Wednesday and a quarter-finals place.

The dramatic Group C triumph completed a joyous return home for the club based in southeastern city Aba to a renovated ground and a new artificial pitch.

Victory lifted four-time African title winners Enyimba to the top of the final standings with 12 points and CARA also qualified for the knockout phase as runners-up with nine points.

Williamsville of the Cote d’Ivoire, who had been expected to beat already-eliminated bottom club Djoliba of Mali in Abidjan, could only draw 0-0 and ended third a point behind CARA.

USM Alger of Algeria and Rayon Sports of Rwanda also booked places in the September 3 quarter-finals draw in Cairo by finishing first and second respectively in Group D.

A missed penalty did not prevent USM overcoming Gor Mahia of Kenya 2-1 in Algiers while Rayon scored early to edge out-of-contention Young Africans of Tanzania 1-0 in Kigali.

The knockout-stage line-up was completed when Raja Club Athletic of Morocco trounced Aduana Stars of Ghana 6-0 to win Group A.

Mahmoud Benhalib, the leading scorer this season in the African equivalent of the UEFA Europa League, raised his goal tally to 10 by bagging a second-half brace.

- Defended valiantly – ASEC Mimosas of the Ivory Coast had to settle for third spot behind Raja and AS Vita of the Democratic Republic of Congo despite beating the Kinshasa outfit 2-0 in Abidjan.

AS Vita, and Renaissance Berkane of Morocco and Al Masry of Egypt from Group B, qualified earlier this month.

Defeat was bitter for CARA, who lost five previous CAF away matches this season, as they defended valiantly with goalkeeper Chansel Massa making a string of fine saves.

But when a Mfon Udoh free-kick rebounded off the crossbar four minutes into stoppage time, substitute Alalade reacted quickest to stab the ball into the net.

It was the second successive Confederation Cup match in which Enyimba grabbed an additional-time winner with Farouk Mohammed converting a penalty at Djoliba.

Williamsville, seeking a last-eight place in their first African venture, dominated without being able to break through a superb Djoliba defence.

The Algerians should have won more convincingly as Mohamed Meftah had an early penalty blocked by the leg of Fredrick Odhiambo and they should have been awarded another spot-kick.

Rayon, who trailed Gor by five points with two rounds remaining, went ahead after 19 minutes through Bonfis Bimenyimana and that goal secured second place with nine points.