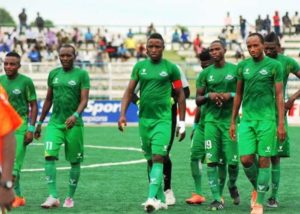 Plateau United skipper Elisha Golbe says he is disappointed that his side will not be crowned Nigeria professional football league champions this season.

Plateau United were the favorite to win the 2019-2020 Nigeria Professional Football League season, but their dream suffer huge set back as the campaign was canceled due to the coronavirus pandemic, with 13 matches remaining.

After long deliberation, the Nigeria Football Federation, League Management Company and the 20 Club Chairmen agreed to end the season abruptly without crowing champions.

While speaking to newsmen, Elisa, said his side should deserved to be crowned Champions by the LMC and other stake holders.

“It was disappointing that we were not crowned as champions, because I believed we deserved it.

”We were the most consistent team, won most matches, conceded the least goals and we are sat comfortably on top of the table, so it is sad that they didn’t award us the title”, he said.

Meanwhile the Nigeria Football Federation and the League Management Company adopted point per game model to determine the final, by standing and Plateau United kept their place on top of the league.

They are joined by Enyimba in the CAF Champions League next season.