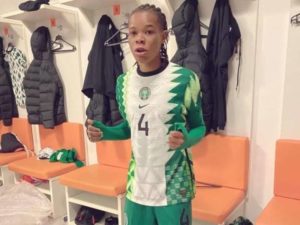 Super Falcons player and captain of Edo Queens FC, Glory Ogbonna, has described her move to Umea IK FF of Sweden as a dream come true.

Ogbonna, who signed for the Swedish Club side last week, said that it had always been her dream and that of her father to ply her trade abroad.

Speaking in an interview with the newsmen, the defender recalled how she had been working on the move abroad, saying that she was happy the deal finally came through.

The versatile defender, who said she could play in any of the positions at the back line, described her move abroad as her major achievement.

Ogbonna, who will be in Austria with the Super Falcons as part of preparations for the Aisha Buhari invitational tournament, singled out Edo Deputy Governor, Philip Shaibu and her father for the successful Umea IK FF deal.

“I want to appreciate the Edo Deputy Governor, Shaibu, for his fatherly advise and ensuring that my deal with Umea IK FF was done according to FIFA rules, without cutting corners.

“In spite of all odds, the deputy governor and the entire management team of Edo Queens and players stood by me throughout the negotiation period, ” she said.

She identified her father, also a footballer, who did not get the chance to play as he desired because of his parents’ insistence on education, had been instrumental to her success.

“My parents, particularly my father, have been my greatest supporters in the game of football, he has done everything humanly possible for me to succeed in this sport.

“It has always been his wish that since he couldn’t take his talent in the game to the level he wanted, he will support any of his children who has the flair for the sport,” she said.

Ogbonna said going abroad would enable her improve her skills and contribute her quota to the development of football in Nigeria, describing the Nigeria professional women’s football league as “the ground to start with for any female footballer in Nigeria.”

She noted that although the female football league was still developing in Nigeria, it had promises of producing some great players for the country.

“As you can see, the league is really producing great talent that can represent the country at any level of football and also produce players abroad; it is a great league I must say,” she said.

Ogbonna said her first invitation to the camp of the Senior female team was in 2014.

Newsmen report that she joined the camp of the U20 national team in 2015 and “since then, I have been growing in the game by featuring in no fewer than 18 matches for the Super Falcons,” she said.