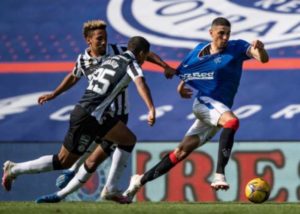 Balogun started in the last league match against Dundee United on Saturday but he was substituted in the second half after sustaining an injury during.

Gerrard also lost three players to different injuries in the game, but he’s optimistic that Balogun will return in time for the third qualifying round of the UEFA Europa League slated for Thursday.

Balogun lasted for 62nd minutes last weekend but did enough to help the team to a 4 – 0 win over their visitors.

The former Wigan and Bright and Hove Albion has been impressive since joining the team and has featured in four league games so far.

“We think Leon will be fine. We think we got it before it was an injury, it was a bit of tightness and we made the right decision to take him out of the team,” he told Daily Record.