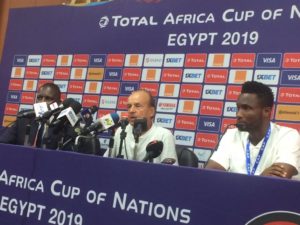 Gernot Rohr says the Super Eagles are not 100 per cent fit, but are ready to confront their AFCON 2019 first Group B opponent, the Swallows of Burundi, with respect on Saturday.

The three-time African champions will begin their quest for a fourth AFCON title against the debutants at the Alexandria Stadium. The kick-off is 6pm Nigerian time on Saturday.

The Swallows who were unbeaten in the qualifiers, have a number of big names in their squad, with the duo of Saido Berahino and Fiston Abdoul-Razak the most prominent amongst them.

The Super Eagles are one of the favourites to win the title and will parade some of the best talents on the continent in the competition.

But despite his side’s superiority in terms of playing personnel and technical ability, Rohr states that they will be humble against the Burundians.

“We prepare to face them with humility because they were unbeaten in the qualifiers. It’s difficult because all the big countries are here , but I believe the competition will be wonderful with passionate fans and nice pitches,” Rohr stated during his interaction with the media at the Alexandria Stadium on Friday.

The German-born tactician also provides update on the injury situation in camp ahead of the game.

“Everyone isn’t fit. Four or five players missed one week of training and have only trained for a few days. We are not in the best shape, but we don’t complain. The team have solidarity, perhaps even too much solidarity. But we will be ready; the fittest one will play tomorrow.

“We’re used to the pressure and we are cool. We are happy to start this competition and we have been together for three weeks. The weather is a bit different from what we are used to in Nigeria, and it affected us because half the team fell sick, but now only one player is sick.”