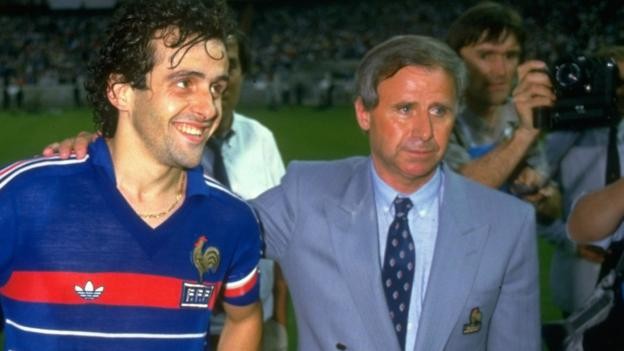 Hidalgo (top row in suit) had a distinguished playing career, winning two Ligue 1 titles and two French Cups with Monaco in the 1960s

Michel Hidalgo, who led France to their first major trophy at Euro 1984, has died aged 87 of natural causes.

Hidalgo had been ill for a number of years and his family told a French radio station he had died "naturally of exhaustion" at home in Marseille.

Hidalgo was coach of Les Bleus from 1976 to 1984, leaving the job after hosts France beat Spain 2-0 in the final of the European Championship.

Two years before, France lost to West Germany in the World Cup semi-finals.

Michel Platini, who captained the 1984 side and scored nine goals in the tournament, said in a statement: "Michel Hidalgo left a considerable legacy. He rebuilt French football at international level.

"As coach, Michel took the France team to its greatest heights, opting for a beautiful style of football which allowed each one of us to fully express our individual talents."