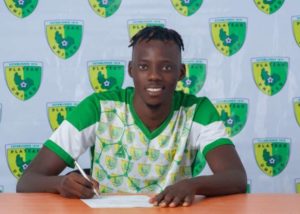 Nigeria Professional Football League side Plateau United has secured the signing of former Shooting Stars striker Sunday Adetunji to their ranks ahead of the 2020/21 league season.

Adetunji who has been linked with five different teams, put an end the speculation about his future when he revealed that he has signed a deal with the 2017 league champions via his social media handle on Wednesday.

Adetunji was linked with Abia Warriors, Rivers United, Shooting Stars, and Kano Pillars, but he later put pen to paper for a two-year contract after strong negotiation involving the player and his management team.

“I’m happy to announce my arrival at this iconic club, Plateau United.

“A new beginning and challenge. My home”, he said on Twitter.

The former Shooting Stars and Enyimba striker will replace Tosin Omoleye who left the club for the Aba Elephants.

Adetunji will add quality to Plateau United’s attack, who are expected to help Plateau United challenge for the league and Champions League title next season.