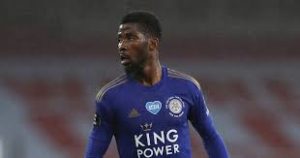 Former Leicester City striker Tony Cottee has said he believes Kelechi Iheanacho ought to start for ‘The Foxes’ in Saturday’s clash against Brighton after his “brilliant” goal at Burnley tonight.

Iheanacho justified a rare start for Leicester with a Made-in-Nigeria strike after 34 minutes, when he superbly connected home a center by Super Eagles teammate Wilfred Ndidi to draw his club level against Burnley.

It was his second goal in his sixth start.

“It was a brilliant goal, he hit it true,” saluted Cottee.

“That should get him a start against Brighton on Saturday.”

Leicester remain third on the Premier League table with 50 points after 27 matches.