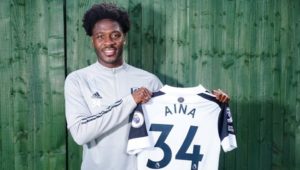 The Nigeria international will be spending the whole of the 2020-2021 season on loan at the Cottagers, including the option to make the transfer permanent.

London-born Aina joined Torino on an initial loan deal in the summer of 2018, before he was acquired on a permanent basis the following season.

In his first words as a Fulham player, Aina stated : "I feel very excited and privileged to be able to play for a Club like this.

"It feels amazing to be back closer to my family, back in the capital where I was born and raised.

"I feel very comfortable on either foot, I can fill in wherever needs be. I’d say I’m pretty quick and I like to attack, but I also like to help the team and do the dirty work as much as I can."

Aina, who was a key member of the Super Eagles squad that won bronze at last year's Africa Cup of Nations, has been assigned the number 34 jersey by Fulham for the 2020-2021 season.