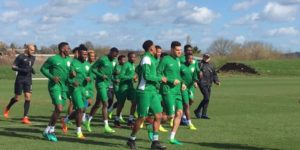 The draw for the second round of the World Cup qualifiers will hold at the Nile Ritz-Carlton in Cairo, Egypt on 21 January 2020.

"This is a historic city and you cannot talk about Nigerian football without talking about Edo state," Pinnick said in an interview with Brila FM after the NFF Congress held at the ancient city.

"At a time we had five (Nigeria) Premier League clubs from Benin City - Flash Flamingoes, Bendel United, Bendel Insurance all these clubs were in Benin and they paraded most of the Super Eagles players so football is coming home and that's why we are bringing the first World Cup qualifying match to Benin City," Pinnick stated.

The 14 winners of the first round qualifiers joins the 26 top seeded teams to form ten groups of four contestants each based on the December 2019 FIFA rankings with the ten group winners then advancing to the final round where the five qualified teams for Qatar 2022 will emerge.

The last time Benin City hosted a major qualifying match for Nigeria's men's team was between 2011 and 2012 during qualifiers for the football event of the London 2012 Olympics which Nigeria like the 2020 edition failed to qualify for.

Nigeria have participated at six editions of the World Cup between 1994 and 2018 with the only absence at the tournament being the 2006 World Cup in Germany.