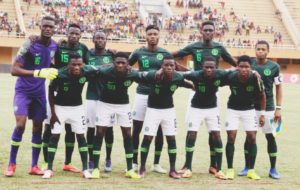 The draw for the 2019 FIFA U-20 World Cup will take place on Friday, February 24 in the city of Gdynia, Poland with Nigeria’s Flying Eagles among the 24 qualified teams that will know their group opponents

The biennial competition will be staged in six Polish cities; in Lodz, Bielsko-Biala, Bydgoszcz, Gdynia, Lublin and Tychy from 23 May to 15 June 2019.

The Flying Eagles are one of the four African countries that will compete for honours at the 2019 FIFA U-20 World Cup. The other three are, newly crowned continental champions, Mali, Senegal and South Africa

Paul Aigbogun’s men took fourth position at the just concluded U-20 Africa Cup of Nations in Niger after losing to Mali in the semi-final and also lost in the third-place play off to the Amajita of South Africa.

The Flying Eagles who have seven U-20 AFCON titles failed to qualify for the 2017 edition of the competition, losing to minnows Sudan in the qualifiers.

Aigbogun and his charges will look to become the second African country to win the FIFA U-20 World Cup after Ghana who won it in 2009.

Nigeria’s Flying Eagles has however featured twice in the final losing 2-0 to Portugal in 1989 and 2-1 to a Lionel Messi inspired Argentina in 2005.

Asia will be represented at the 2019 FIFA U-20 World Cup by Japan, Korea Republic, Qatar and Saudi Arabia in the tournament, while CONCACAF have four representatives; Honduras, Mexico, Panama and USA.

France, Italy, Norway, Portugal, Ukraine and hosts Poland will fly Europe’s flag in the tournament, while Oceania have New Zealand and Tahiti as their torch bearers.

Conmebol will be represented by Argentina, Colombia and Ecuador.

The FIFA U-20 World Cup has long been a breeding ground for some of world football’s most gifted players, with the likes of Diego Maradona, Lionel Messi, Robert Prosinecki, Zvonimir Boban, Adriano and Paul Pogba having blossomed at the tournament.

The likes Mutiu Adepoju, Taye Taiwo John Mikel Obi are some of the Nigerian players who shone in the competition in the past with tjw Flying Eagles, and later had a gloriorepresented t the senior level