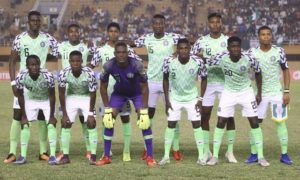 South Africa’s U-20s claimed the bronze of the ongoing 2019 U-20 Africa Cup of Nations defeating Nigeria 5-3 on penalties in the Third-Place match after full open play ended goalless in Niamey on Saturday.

It was the first time South Africa finished third in the history of the competition after two fourth-place feats in 2009 and 2017.

Siphesihle Mkhize who scored South Africa’s first goal in the tournament netted the decisive spot kick to earn the Amajita a crucial win.

It was the third time that seven-time champions, Nigeria finished fourth in the competition.

Both teams had earlier played out a goalless draw in their second Group A match of the competition.

Paul Aigbogun made five changes to the side that lost 4-3 on penalties to Mali in the semi-finals on Wednesday after regulation time scoreline ended 1-1.

The Flying Eagles started off slowly and despite having more possession of the ball, failed to create a clear cut chance before the interval.

Eight minutes into the second half, Aigbogun hurled off Peter Eletu for Abubakar Ibrahim as he went in search of goals.

Effiom Maxwell came close to breaking the deadlock in the 65th minute with an overhead kick but his shot was saved by the South African goalkeeper.

But it was South Africa who had a chance to score with a fast break, but they could not string the right passes, only forcing a save from Ogundare in goal for Nigeria.