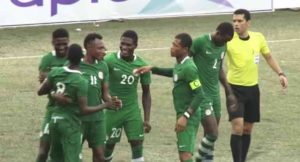 Nigeria U20 team better known as the Flying Eagles defeated Nigeria Professional Football League ( NPFL) side Kano Pillars in their final warm up ‎game ahead of their campaign at the WAFU U20 Championship.

Maxwell Effiom, Solomon Thompson and Victor Boniface got the goals for the Coach Paul Aigbogun tutored side while Mustapha Salisu scored Kano Pillars lone goal of the game.

The game is the final test game for the Nigerian team ahead of the WAFU Championship in Benin Republic which will help the coaches test their players in tournament conditions ahead of their campaign at the Africa U20 Cup of Nations.

Nigeria are drawn in group B alongside arch rivals Ghana, host Benin Republic with Niger Republic completing the list of teams in same group with Nigeria for the tournament that gets underway next weekend.