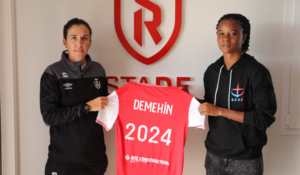 Falconet star, Tosin Demehin has been praised for her brilliant display in her maiden match for her new club Stade de Reims over the weekend.

The former Rivers Angles defender moved to the French side just last week and has intently impressed, eliciting praise from her Coach, Amandine Miquel.

“It was her first game for the club and she did her best,” Miquel told SavidNews.com.

“Although there is a lot of to improve upon but having arrived just two days before the game it was a good first game performance. I am very impressed.”

Arriving and training with her new club in less than two days, Demehin started and played the full 90 minutes of the Red and Whites’ 2-2 draw with Paris on Friday.

The Lagos born defender made a number of blocks to contain the pouring attacks of the high-flying Parisians.

Demehin and her side her up against unbeaten Paris Saint Germain in the club’s sixth game of the French D1 Arkema campaign.