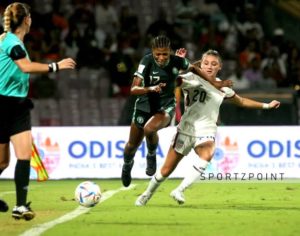 Nigeria U-17 girls, the Flamingos book their place in the semifinal of the ongoing FIFA U-17 Women's World Cup in India, Nigeriasoccernet.com can report.

The girls against all odds defeated the United States opponent 4-3 in penalties after the regulation time finished 1-1.

Edafe Mamuzo put the Flamingos ahead from the penalty spot early in the first but the United leveled proceedings before the break.

No breakthrough for both sides in the second as the game edged straight into penalty shootout.

The Flamingos emerge victorious over their American counterparts beating them 4-3 on penalties.

The victory means the Flamingos will be playing in the semifinal for the first time in their history since the start of the FIFA U-17 Women's World Cup.

They face the winner between Colombia and Tanzania in one of the semifinals.