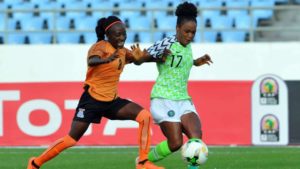 The Federation of International Football Association (Fifa) and the Nigeria Football Federation (NFF) have celebrated with Francisca Ordega on her 27th birthday.

The striker was born in Gboko, Benue State, Nigeria and launched her professional football career with Nigeria Women's Premier League side Bayelsa Queens in 2008.

After leaving the Yenegoa outfit, Ordega joined Rivers Angels in 2011 before she sealed her first move abroad to Russian side Rossiyanka a year later, and continued her career at Swedish club Pitea in 2013.

In 2015, she joined Washington Spirit, where she had loan moves to Australia's Sydney and Spain's Atletico Madrid during her four-year campaign with the US' National Women's Soccer League team.

Ordega left Spirit in 2019 for Chinese Women's Super League side Shanghai Shengli, inspiring them to a runners-up position last season.

The major highlight of her career was in 2015 when she impressed at the Women's World Cup in Canada, where she inspired Nigeria's incredible comeback in a 3-3 draw with Sweden in Winnipeg.

The striker made her debut for the Super Falcons in 2010 and has now played 26 times for the West Africans, scoring seven times and emerged an Africa Women's Player of the Year finalist in 2018.

Fifa and the NFF have shared heartfelt messages to the Super Falcons winger as she reaches a new age.