during the Russia 2018 World Cup Qualifier match between Nigeria vs Algeria on November, 12th 2016 at Godswill Akpabio Stadium©Kabiru Abubakar//Backpagepix

The Nigeria Football Federation (NFF) and Fifa have celebrated with Al-Nassr forward Ahmed Musa on his birthday.

The speedster was born on October 14, 1992, in Maiduguri, and has been sent wonderful messages on his 28th birthday. 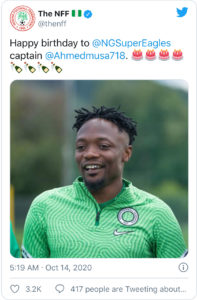 The forward has enjoyed great success on the international scene since breaking into the limelight at the 2010 Wafu Nations Cup, hosted in Nigeria.

The forward’s impressive displays in the competition inspired the West Africans to the final of the tournament and was subsequently handed his Super Eagles debut at the age of 17 against Madagascar in 2010.

Musa has risen to the team’s captain and has delivered memorable eye-catching performances for the West Africans.

The winger put smiles on the faces of the Super Eagles fans at the 2014 and 2018 World Cup tournaments in Brazil and Russia, respectively. 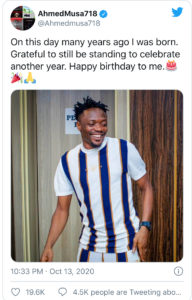 Musa scored four goals for the three-time African champions at the global tournaments to become Nigeria top-scorer in the competition.

The forward also played a prominent role as the West Africans won the 2013 Africa Cup of Nations South Africa.

He recently shone during his 93rd appearance for the Super Eagles against Tunisia on Tuesday, providing an assist to help the side avoid defeat in the encounter.

The football governing bodies have sent birthday wishes to the winger, recollecting his impressive showings for Nigeria. 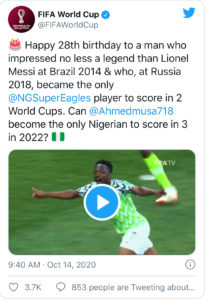 The fleet-footed forward has also enjoyed success at club level since he started his career with GBS Football Academy.

Musa bagged a number of goals in the Nigeria Professional Football League (NPFL) before he moved to Europe, joining VVV-Venlo from Kano Pillars on loan.

His impressive performances earned him a move to Russian Premier League side CSKA Moscow in 2012 and spent four years with the side during his first stint before moving to Leicester City.

After two years in England, he moved back to Russia to re-join CSKA on loan before he permanently switched to Saudi Arabian side Al-Nassr in the summer of 2018.

Since teaming up with Al-Nassr, Musa has helped the club win the Saudi Professional League and Super Cup.

The forward will hope to continue his impressive form for both club and country in the 2020-21 season.