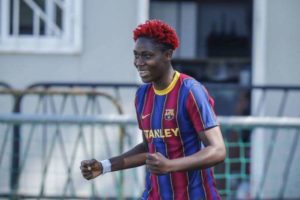 On a day she scored FC Barcelona’s 100th goal in the UEFA Women’s Champions League (UWCL) during their 3-0 win over English side, Manchester City in the quarter-final first-leg tie played in Barcelona on Wednesday, Super Falcons star, Asisat Oshoala, also made the list of ESPN’s world Top 50 players.

Oshoala who scored the first goal for Barcelona in the 35th minute off Mariona Caldentey assist, is the No. 27 in the list of world best women’s footballer as compiled by the authoritative United States (US) media outfit, ESPN.

According to ESPN, “Oshoala is probably Africa’s most accomplished female footballer, having won the CAF Women’s Player of the Year award four times, the latest in 2019.

“That was the year she signed with Barcelona, where she’s since won four titles and a UEFA Women’s Champions League runners-up medal. Oshoala is exceedingly accurate inside the penalty area and is always the teammate you want taking the final touch. Oshoala has continued to impress for the Catalan giants, averaging a goal per game since arriving in Spain, and now that Nigeria have reiterated their status as the premier women’s side on the continent, Oshoala is undeniably their premier player”, says Lindsay du Plessis of ESPN who wrote her profile.

Meanwhile, the U.S. women players featured heavily on the first-ever ESPN FC Women’s Ranking, though there’s tough competition all over the globe for top honors in the ESPN compilation.

While 2020 might have thrown everything it could in the way of women’s soccer, leagues and clubs fought to get players back on the pitch and give us enthralling matches while we were all stuck at home. In 2021, global excitement around the game is at an all-time high.

The National Women’s Soccer League in the U.S. is on the cusp of returning in all its glory — beginning on April 9 — while in Europe, there are some nail-biting league races as well as big ties ahead in the latter stages of the year.

According to a statement from ESPN, “some of the stars on the list played full season in 2020, while others are just getting back into the swing of things after leagues were suspended. It was important to our panel that individual achievement and talent were recognized outside of winning cups and trophies.

Below are the inaugural Top 50 women’s players rank.