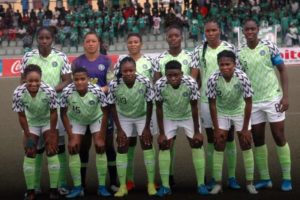 Nigeria’s Super Falcons who beat Algeria home and away to zoom into the next round of the 2020 Olympic qualifiers were each paid N65, 000.

It was gathered that for the home victory against Algeria at the Agege Township Stadium last Tuesday, the players received N50, 000 and N15, 000 for their transport which excludes the return flight tickets paid for the six foreign-based players invited.

The money was transferred into the players’ bank accounts after the match.

The players we further gathered received $500 (about N181, 500) each for the away victory against Algeria in the first leg. Payments of bonuses and allowances have in recent past is the subject of controversy forcing players to sometimes protest before getting paid.

In continuation of their quest for the tickets to the Olympics, the Falcons will next engage Ivory Coast in another two-legged encounter with the first leg billed for Yamoussoukro September 30 while the return leg is scheduled for October 4 in Lagos.

Other teams involved in the two-legged encounters include Zambia against Botswana, Cameroon against DR Congo, and Ghana against Kenya respectively.