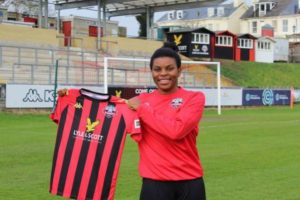 Having launched her career at Portsmouth, she had an impactful spell at Oxford in 2016 before being snapped up a year later by Brighton, where she left for Sweden after spending three years there.

The Nigeria international becomes the latest addition to Simon Parker’s team after breaking ties with Swedish side Vaxjo.

With 12 months left on her contract, Umotong decided to call time on her journey with the Damallsvenskan outfit and went on to cite academic reasons for the surprise termination of her contract in December.

Before abruptly ending her stay in Sweden, the 26-year-old shone in her short spell, inspiring Vaxjo from the bottom of the log to top-flight safety, scoring three goals in 16 games across all competitions.

On joining the Rocks, Parker’s team have boosted the with the major coup of acquiring the services of the Nigeria international, in a quest for Women’s Super League promotion.

Her return to England will permit her to continue her studies following her graduation with a first-class degree in economics in 2017.

Having completed her move, she will be eager to hit the ground running for the Rocks, after finding themselves in the sixth position, with 15 points from 11 matches in the current campaign.

Lewes will welcome Sheffield United in their next Championship fixture on Sunday and Umotong will be gearing up for her debut at the Dripping Pan.