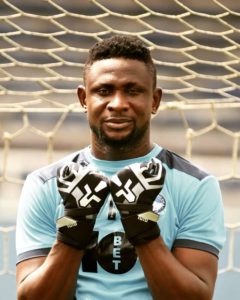 Reactions continues to trail the performances of the Atlas Lions of Morocco's at the ongoing 2022 Qatar FIFA World Cup with many well meaning personalities in the football world showering encomium on them for breaking new grounds for Africa.

Football pundits, ex-internationals across the continent believed their achievement will help instill the belief spirit in African teams when the 2026 FIFA World Cup starts in America.

An historical world cup it has been for Africa as for the first time in the history of the tournament, all African representative won at least a match before crashing out.

No doubt Nigeria was missed at the mundial but there is this belief that should the Super Eagles had qualified, they would've performed even better than Morocco.

Many football loving Nigerians disagreed with his comment but Dr. Sanusi Mohammed seems to be right with Super Eagles and Enyimba goalkeeper, John Noble also shares in his belief.

Speaking exclusively to Nigeriasoccernet.com, John Noble stated that the Super Eagles would've done even better then the Atlas Lions of Morocco.

The Super Eagles goalie said the players were not happy aftermath of the country's loss to Tunisia in the round 16 of the 2021 AFCON in Cameroon.

"What happened against Tunisia during the African Cup of Nations, we were not happy, it wasn't an easy period for us, so we all wanted to be at the world cup," Noble added.

"If Nigeria had been at the world cup, trust me with the spirit in camp, we would've made it to the final or maybe the semifinal because everyone, every player at the camp them really wanted to play at the final.

"After the game again Ghana, we were at the stadium for about 2 hours, everyone was crying.

"I felt bad because it was my first experience and I really wanted to go to the world cup. Have gone to African Cup of Nations and its just remaining the world cup for me to fulfill everything for the country."

Missing out of the 2022 World Cup was a big loss for the players of the Super Eagles, the fans and even the nation as a whole but Noble believes come 2026, the Super Eagles will be one of Africa's flag bearer at the World Cup.