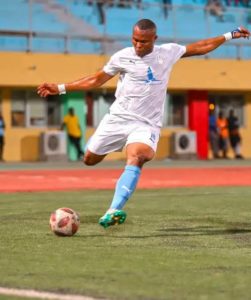 Lanky Nigerian born Djibouti striker Samuel Akinbinu has reaffirmed his commitment and that of his teammates to making Djibouti national team a force of reckon with in Africa football, Nigeriasoccernet can exclusively report.

Samuel Akinbinu who became the player of the Djibouti national team over a year ago after switching nationalities is gradually becoming a household name in the northeast coast of Africa country.

Samuel after lifting the Djibouti league and FA Cup with Arta/Solar 7 for the second consecutive season returned to Nigeria for the second edition of his Samuel and Friends friendly game.

Speaking exclusively to Nigeriasoccernet.com, on Arta/Solar 7 back to back domestic triumph, Samuel said:

Speaking about the CHAN qualifiers which Djibouti will partake in the preliminary rounds from the 22nd of July, Samuel said:

"So far so good we're preparing well. Although I'm yet to join the team because I'm in Nigeria but very soon I'll join the team.

"Everything is going well at the moment and we're planning to qualify by all means this time around."

Samuel also said he understands the Djibouti national team system now far more than when he just switched nationality to the country.

The former Bayelsa United striker explained why he started the Samuel and Friends friendly game which is now in its second edition.

"We are playing this Samuel and Friends to bring friends together. To show love, care, to forgive, to let go many things and most importantly so as not to forget our hood. Where we started from because that is the most important things about footballer.

"We have to carry everyone along. In summary it show and spread the love all around."

Samuel remains committed to Arta/Solar 7 where he's spent more than two seasons already and he's not planning to quit the club anytime soon.