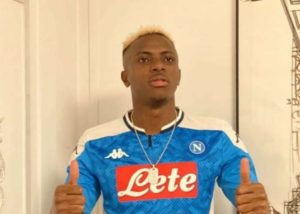 The 21-year-old striker has joined the two-time Serie A champions from top French club OSC Lille where he excelled in the 2019/20 season.

Osimhen scored 18 goals in 38 appearances for the Ligue 1 side and he was linked with Napoli since May 2020.

Napoli released the following statement on 31 July 2020 as they announced the signing of the highly-rated marksman in a deal reportedly worth around €81 million.

“The SSC Napoli has acquired the prestigious sportive performance of Victor Osimhen from Lille as a definitive title.”

“Osimhen is a Nigerian national,” a club statement read.

The lanky forward was on the books of German side VFL Wolfsburg between 2017 and 2019, but he struggled for game time at the club.

He spent the 2018/19 season on loan at Belgian outfit Sporting Charleroi where he played 36 games and scored 20 goals, before joining Lille in July 2019.