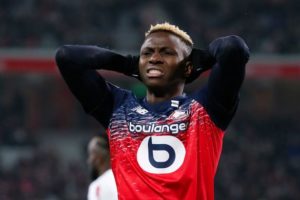 EPl Champions Liverpool might not be spending heavy in this summer transfer but with the likes of Xherdan Shaqiri and Dejan Lovren facing uncertain futures at Anfield, the Reds current uncertain stance in the market is one that could easily change with plenty of time for business before the window closes in October.

Nigerian and Lille's prolific striker who has been heavily linked with Liverpool and Napoli in recent weeks.

According to RAI Sport journalist Ciro Venerato, cited by Sport Witness, Liverpool CEO Peter Moore is pushing for the club to sign the forward.

Earlier reports had claimed Napoli were favourites to land Osimhen only for Liverpool to hijack the deal, with his new agent, William D’Avila, is attempting to push a move to the Premier League.

“Yesterday there was a telephone contact for Osimhen, D’Avila called Cristiano Giuntoli, and this gives us hope," he said. “In recent days he always postponed, despite having always responded with great grace. In England, there have been contacts, live meetings with the Liverpool chief scout.

“This agent is very close to the Liverpool CEO, who is pushing a lot for Osimhen, but the timing of the market is different from ours.

“The player continues to be of interest to the Reds, United and Tottenham, but the times are dilated.

“Napoli have the advantage because they have a definite agreement with Lille, his club are pressing him so that he accepts the blue shirt.

“As mentioned earlier, in England, the market is made at the end of the season, and the French club cannot wait.” Vanerato on Radio Kiss Kiss Napoli.

Osimhen would cost a pretty penny and with Liverpool front's three not leaving anytime soon, it's hard to see them breaking the bank on a striker despite reported interest.