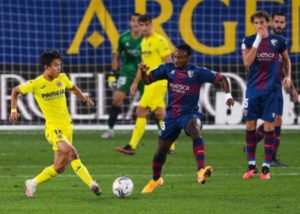 Nwakali was introduced into the match in the second half and he helped his side to deserving 1-1 draw at the Estadio de la Ceramica.

Meanwhile, Samuel Chukwueze was in the starting line up for the hosts, and the left-winger featured for 90 minutes.

Pablo Maffeo opened the scoring for the newly promoted Huesca early in the second half, but Spanish forward Gerard Moreno equalized for Villarreal.

Villarreal was awarded a penalty in the 68th and Moreno stepped forward to smash it home beyond the goalkeeper.

Huesca thought the had won the game, when they find the back of the net in the 88th, the effort was later ruled out for offside.

After making his debut, Nwakali will be hoping to start his first top-flight game for Huesca when Cadiz.