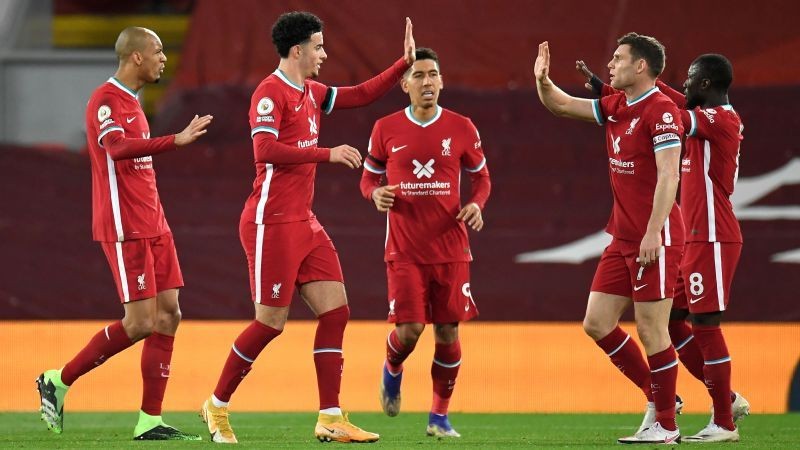 Liverpool moved level on points with Tottenham atop the Premier League table with a 3-0 victory over Leicester at Anfield on Sunday.

A Jonny Evans own goal handed the defending champs their opener before Diogo Jota sent Jurgen Klopp's men into the break with a 2-0 advantage before Roberto Firmino completed the scoring late.

The victory puts the Reds on 20 points from nine matches and sees them behind Spurs only on goal differential. Leicester are in fourth with 18 points after the defeat.

Liverpool were ahead after 21 minutes thanks to Evans, who inexplicably fired a free header into the top corner while trying to clear a corner kick from inside his box.

The own goal was the sixth of Evans' career in the Premier League, which trails only Martin Skrtel (7), Jamie Carragher (7), and Richard Dunne (10) for the most all-time.

The in-form Jota added a second four minutes before half-time with a confident running header from an inch-perfect Andy Robertson cross after the left-back used some fine footwork to escape a marker and curl into the box.

The former Wolves man has now scored in all four of his home league appearances for Liverpool; making him the first player in club history to score in each of his first four top-flight home games.

Firmino then capped the comfortable win with four minutes remaining with an unmarked header of a James Milner cross -- the Brazil international easily nodding inside the far post from the middle of the box.