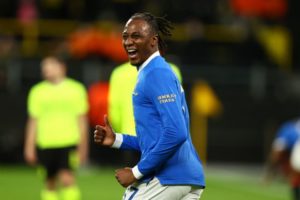 Joe Aribo and Rangers book their place in the Europa League final after overturning a 1-0 defeat they suffered at the Red Bull Arena. They put up a solid performance and defeated their German foes 3-1 at Ibrox to go through 3-2 on aggregate.

The 60th game of Rangers’ season delivered the most memorable moment of all. There could be better – far better – to come in Seville on 18 May.

With Giovanni van Bronckhorst’s team on the ropes and RB Leipzig in the ascendancy, John Lundstram bulged the net in front of the Copland Road stand. The level of euphoria depicted a goal for the ages. Who cared that it was scrappy?

Rangers, a decade on from financial meltdown, will compete in a Europa League final. Leipzig will be sore about that given their prominence at the time of Lundstram’s intervention but the truth is Rangers’ effective football prevailed.

Rangers could take heart despite last week’s 1-0 loss in Saxony. Leipzig had been frustrated and blunt for long spells of that first leg tie, with Monday’s Bundesliga defeat to Börussia Monchengladbach adding to a sense Rangers may be meeting Domenico Tedesco’s team at the right time. The counterpoint related to Leipzig’s useful propensity to score away goals in Europe; the claiming of the opening goal here would leave Rangers, who started without a recognised striker in their lineup, facing a stern challenge.

The subdued, slightly curious pre-match scene owed everything to the sudden death of Rangers’ kit man of more than three decades, Jimmy Bell. Yet after the completion of a minute’s silence, everything suddenly felt normal again. Just as Bell would want it to be. 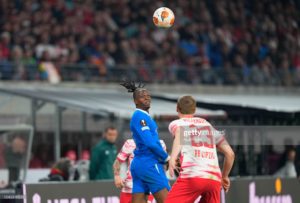 Leipzig used the earliest exchanges to suggest the carrying of a threat on the break, without posing any challenge to Allan McGregor in the Rangers goal. The hosts provided ruthlessness where the Germans could not, sending Ibrox into raptures when doing so.

Glen Kamara started the attack that restored aggregate parity, with the midfielder freeing Ryan Kent on the left flank. Kent drove into the penalty area before firing across the face of goal. As is typical, the captain James Tavernier popped up from right back to slam beyond Peter Gulacsi from close range. Leipzig frustration would have been intensified by the fact their countrymen from Borussia Dortmund had conceded an almost identical goal at Ibrox earlier in this competition.

Not content at hauling themselves back into the tie, Rangers snatched the lead just six minutes later. This was a goal of wonderful quality, Joe Aribo’s pass to Scott Wright the precursor to a curling finish by Kamara from 19 yards. Wright had cushioned the ball beautifully into Kamara’s path. Only a glaring miss from Aribo prevented Rangers from scoring three goals within the first half hour.

Leipzig, so strangely for a team that plays at such a high domestic level, were dazed and confused. Dani Olmo missed the target with their first opportunity of note. Willi Orban headed wide from Angeliño’s free-kick.

These flirtations with the Rangers goal aside, Leipzig offered nothing. Tedesco was surely happy to retire to the dressing room with no further damage done. His star forward, Christopher Nkunku, spent the first half on the game’s periphery. 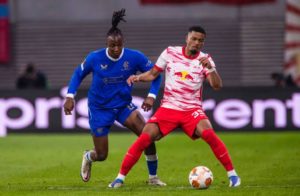 Aribo had been removed from proceedings seconds before the break after suffering a head injury. His replacement, Fashion Sakala, connected with a Kent cross within five minutes of the restart but watched his header drift beyond Gulácsi’s left-hand post. The good news for Rangers was that Leipzig had still failed to test McGregor with an hour played. Tedesco grew increasingly and visibly agitated. No wonder; having slipped to fifth in the Bundesliga, this Europa League campaign suddenly provided a route into next season’s Champions League as may be necessary.

Red Bull did not plough millions into this club, which had not even been formed when Rangers reached the Uefa Cup final of 2008, for the provision of false dawns. Could Nkunku, who arrived in Glasgow having found the net 32 times this season, really draw blanks in back-to-back games against Rangers?

It transpired he could not. From Angeliño’s whipped ball from the left, the Frenchman connected with a first time volley that left McGregor helpless. Nkunku had lived up to his growing reputation at the precise moment his employers needed him to.

Moments earlier, McGregor had saved brilliantly from the marauding Konrad Laimer. Leipzig had a pulse, due primarily to Tedesco replacing the hopelessly ineffectual Olmo with Dominik Szoboszlai.

Leipzig now looked by far the more likely side. Yet this Rangers run has been built on occasionally astonishing levels of resilience. Gulacsi flapped horribly at a crossed ball, a moment his defensive colleagues were unable to atone for. Lundstram struck the decisive blow which sent Rangers to the final. Rangers would be hoping to lift the Europa League in Seville on the 18th of May.