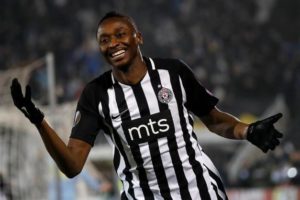 Nigerian striker Umar Sadiq scored his fifth league goal of the season in his sixth start for Partizan Belgrade in their 3-0 thumping of Rad Beograd in a Serbia Super Liga clash on Saturday.

Wilfred Ndidi made his first Premier League appearance in an unorthodox centre-back role for Leicester City, who trounced West Brom 3-0 at the Hawthorns on Sunday.

The Nigerian midfielder, who had played an hour in defence in the Foxes’ final pre-season friendly against Blackburn, posted a decent performance in his

makeshift role despite a nervous start that included some nervy back-passes.

His compatriot, Kelechi Iheanacho was an unused substitute in the win.

At the Tottenham stadium, Alex Iwobi was missing from Everton’s match-day squad that defeated Spurs 1-0.

It remains to be seen how Iwobi can break into the Toffees’ first team following the arrivals of Abdoulaye Doucoure, James Rodriguez and Allan, after last season’s campaign, where he scored one EPL goal and failed to contribute a single assist.

In Spain, Samuel Chukwueze made his first LaLiga start of the season for Villarreal, who slumped to a 1-0 loss at home to newly-promoted SD Huesca, who paraded compatriot Kelechi Nwakali for 30 minutes in his Spanish topflight debut.

In Belgium, David Okereke scored his first goal in 2020 for Club Brugge in their 4-1 win against Waasland- Beveren in a Belgian Pro League game on Saturday.

The former Spezia forward powered in a header in the 50th minute before he was replaced by Kreppin Diatta 12 minutes from time.

In the Eredivisie, Tyronne Ebuehi was on for 75 minutes as FC Twente started the new season on a high following a 2-0 home win against Fortuna Sittard.It was his first league game in two years after recovering from a cruciate ligament injury.

Also, Super Eagles goalkeeper Maduka Okoye was on the bench as Sparta Rotterdam lost 1-0 at home to Ajax, in their first game of the season. Okoye, 21,

In Russia, Chidera Ejuke, scored on his Russian league debut for CSKA Moscow who edged Spartak Moscow 3-1 in a derby on Sunday.