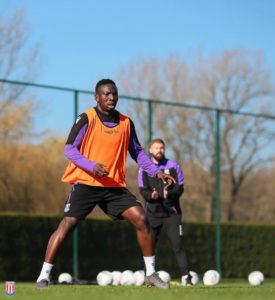 Nigeria midfielder Oghenekaro Etebo has returned to training after missing Stoke City’s 0-0 away draw against Queens Park Rangers last Saturday at the Loftus Road as result of groin injury.

Etebo, 23, picked up the injury in The Potters’ 2-0 win against Nothingham Forest – a game in which he scored his maiden goal for the English Championship club.

He failed a late fitness test ahead of the game against QPR and had to sit out the match with Charlie Adam taking his place in the team.

The former Warri Wolves player took to the social media on Monday to share the good news.

The all-action midfielder has made 25 appearances in the league and scored a goal for Stoke City thus far this season.

Nathan Jones’ men will host Swansea City in their next Championship match at the Bet365 Stadium Saturday.