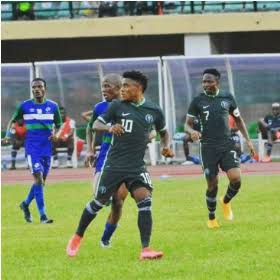 Former NPFL kings Enyimba International FC could lose their star forward Anayo Iwuala this summer as a few North African clubs are keen on snapping up the young forward.

Iwuala only joined Enyimba barely two years ago from local side Delta Force, but the 22-year-old has already established himself as one of the most valuable assets of the Aba Elephants.

The exciting winger was brilliant for Enyimba during the group stages of the CAF Confederations Cup earlier this year, catching the eyes of the handlers of the Nigerian national team.

Iwuala subsequently earned his international callup and made his Super Eagles debut in a 1-0 victory over the Benin Republic during an Africa Cup of Nations qualifier in March.

The Enyimba star would later captain the home-based Super Eagles when they clashed against Mexico in an international friendly in July.

And according to Tunisian publications Gnet, Iwuala has also impressed Esperance Sportive de Tunis, with the Tunisian champions looking to recruit him ahead of the 2021-22 season.

But the road to securing Iwuala’s signature may not be plain-sailing for Tunisia’s oldest active club as a couple of unnamed Egyptian and Moroccan clubs are also interested in the Nigerian international.

Enyimba are believed to be requesting about N250 million naira (500,000 euros) before allowing the youngster to join another club.