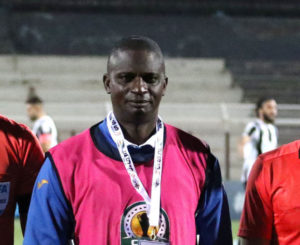 ES Setif coach Nabil Kouki and Enyimba coach Fatai Osho with the Match Officials during the 2021 CAF Confederations Cup football match between ES Setif and Enyimba held at the 8 May 1945 Stadium in Setif, Algeria on 11 April 2021 ©BackpagePix

Enyimba manager Fatai Osho has embraced the “tremendous pressure” his side face in trying to win through to the quarterfinals of the CAF Confederation Cup in their match against Orlando Pirates tonight.

The Nigerian giants will host their South African counterparts in their final Group A clash, set for the Enyimba International Stadium in Aba, at the same time that Algeria’s ES Setif welcome Libya’s Al Ahly Benghazi to the Stade 8 Mei 1945.

All four teams still have a mathematical chance of qualification, though Pirates know that they need only draw in Nigeria to secure top spot in the group.

Enyimba, meanwhile, must win to move into the final eight alongside the six other teams which have already qualified (JS Kabylie, Cotonsport, ASC Jaraaf, CS Sfaxien, Raja Casablanca and Pyramids FC) and Osho is urging his team to go for the jugular.

“So that shows every team will be up and doing, and that’s a tremendous pressure when you are four and two have to go.”

The People’s Elephant manager added that the late kick-off (23:00 CAT, 22:00 local time) will not be an issue: “It’s a good one for both teams because the weather will be fine at that time; it will be good for both Enyimba and Pirates, we won’t stress ourselves.

“Both teams will not play under heat; typically we know we play by 4 pm in Nigeria but playing by 10 pm is not a disadvantage because the weather will even be better for a football game.”