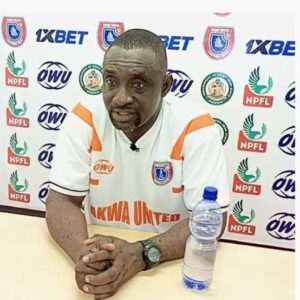 Akwa United Coach, Deji Ayeni has described his sides goalless draw with giants Enyimba international of Aba as a big point for him.

In a post match reaction, the former Sunshine Stars Coach is satisfied with the result and believes it will propel his team for success in their subsequent matches.

He reveals that the point garnered will go a long way for them this season.

"I can't say it was two points lost, it's a very big point for me because that one point has a lot of things to do.

A lot of teams drew at home today and that's one point, now we've got one point out of the three points we lost at home." He said.

On his team not scoring after two games, he said what matters is the tactical acumen the team show in the game.

"Well, it's normal in football, the goal might not come, but the most important thing is the tactical approach of the game, along the line we'll get the goals"

Ahead of the weekend game against Nasarawa United, he is optimistic his team can get three points at the new Jos Stadium.

"When we get to Nasarawa, you will see another rejuvenated Akwa United"

Ayeni enthuses that the team will build on Wednesday's outcome in Aba to kick start their season on a better note.