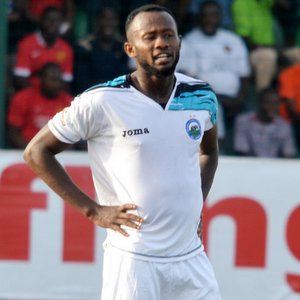 Enyimba have announced they have suspended till further notice captain Mfon Udoh for “gross misconduct” just after the forward said he has quit the club and now wishes to take up a new challenge.

In a letter dated September 7 addressed to Udoh and signed by club chairman Felix Anyansi-Agwu, Enyimba said the captain has been axed till further notice and without pay.

“This is to formally notify you that due to your gross misconduct and indiscipline, you have been suspended indefinitely and without pay till further notice,” the letter read in part.

“Your actions were severe breaches of your expected and entrusted role as captain and ambassador of Enyimba Football Club.

“They also demonstrated your significant disregard for the established authority and governing laws of Enyimba FC.”

Udoh had earlier said he has quit the club after five seasons, saying his contract with them has ended and he now wishes to take up a new challenge.

He also ruled himself out of Sunday’s CAF Confederation Cup quarterfinal at Rayon Sports of Rwanda.