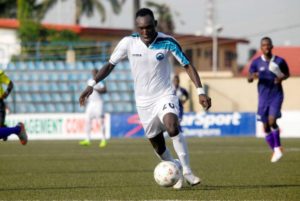 Enyimba winger, Joseph Osadiaye,  believes the club can still challenge for the Nigeria Professional Football League title this season after closing the gap between them and log leaders Lobi Stars to seven points following Wednesday’s 2-0 win against Go Round.

The People’s Elephant who currently occupy sixth position in the table and have two games in hand, are looking to win a record eighth NPFL title this season.

Osadiaye opened  scoring for the Aba giants in the win against Go Round at the UJ Esuene Stadium, Calabar in  the first ever meeting between both clubs in the top flight, with Abdulrahman Bashir adding the second.

“We are almost at the half way point of the season and I believe we still have a good chance of winning the title,” Osadiaye told CSN.

“The good things is that we still have two outstanding games and if we get a win in the two games, then we will be up there with the frontrunners.

“I believe the race for the title will be very tough this season with a lot of teams showing so much promise and also having the quality to win it.

“On our part, we have to ensure we keep working hard and not fall behind in the title race.”

Paul Aigbogun’s men will host Akwa United in a match day 19 fixture on Sunday in Calabar.